You are: Bioenos › Who are we?

BIOENOS, S.L. was established in the year 1998 by José Pascual Gracia Romeo, a doctor in Chemistry and an enologist, with over 20 years of business experience.

Dr. Gracia (best known in the business as Pepe Gracia) entered the fray in the year 1982, in the current Covitoro, and he got two national awards by the INDO: one of them for a wine of Tinta de Toro (1982) and the other for a wine of Malvasía (1983), which was the foundation for starting the present D.O. (“appellation d’origine”) Toro.

Later on he carried out his work in Bodegas Monteviejo SA, a leader of the business in the eighties. In the nineties, he was Manager of Covinca S. Coop, where he got two Zarcillos de Oro (Golden Tendrils) and one Gold Medal in Bordeaux, for the Garnacha and the Vivadillo varieties, which supported their recognition and allowed their commercial development. At that time, he completed his doctoral thesis and conducted an number of R+D projects.

Since the establishment of BIOENOS, S.L., he started the method of Probable Color, a most useful tool, with which he has carried out the whole development of wines from autochthonous “big grape”varieties, like those of Bobal 100% AZUA of La Manchuela; those from the Parraleta of Somontano variety, in Bodegas Ballabriga; and the wine produced from Crespiello or Vivadillo of Almonacid, a variety in process of extinction, which was launched by us under the Pulchrum Crespiello brand.

A very hard work of agronomic tests has been carried out, concerning types of pruning, both in winter and in “green”, thinning out, irrigation , etc., controlling the stress with the Cromoenos method. Most of these tests were performed with Tinta de Toro variety in Bodegas Fariña, S.L., Viñedos y Bodegas Pablo S.C., Explotaciones Montejulia, S.A. and Vitivinos S. Coop. Dr Gracia was an advisor for all these firms.

In his attempt to “look for and give solutions”, Dr Gracia has patented the Cromoenos method; he has designed tossing devices, automatic systems of micro-filtration (which are now commonly used in wine cellars), analytical methods by HPLC, enzyme kits... He has thoroughly studied the origin of the production of volatile acidity by yeast, as well as the origin of fermentation stops, and he has contributed most practical solutions. He has cooperated with the Group of Research in Enology of the University of Zaragoza, under the lead of Dr Juan Cacho, and with the Team of the Politécnica of Madrid, under the lead of Dr José A. Suárez. 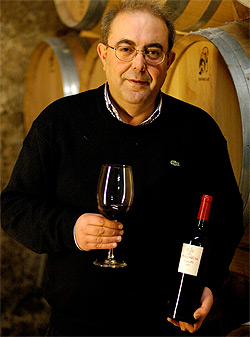 Pepe Gracia with a bottle
of his wine Pulchrum Crespiello,
in Viñedos y Bodegas Pablo,
in Almonacid de la Sierra. 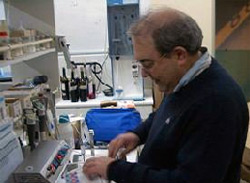 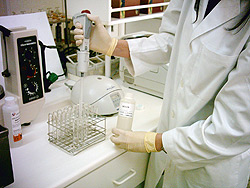